This year we decided to also have a Summer one-night weekend away, visiting some places of interest in a picturesque part of the West Country which had easy access from the M5. When we assembled just off Junction 23 on the Saturday, the morning was overcast and appeared to be on the point of rain, but the forecast was for better things to come.

During coffee we were issued with a route which would take in some places and scenery of interest and while circumstances prevented a convoy forming initially there were to be enough stops during the day to regroup or to travel solo as people wished.

Leaving the main roads and the undulating landscape we dropped down to the coast, passed through Watchet and reached our first stop at Blue Anchor, where we parked overlooking the beach and enjoyed some refreshments.

After a while we continued to Porlock, where we stayed for a couple of hours. This small but interesting place offered a variety of options for lunch and for exploration, with some unusual shops and a small but packed motor museum. 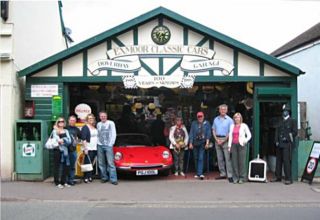 By now the sun had fulfilled the predictions made for it, although by the time that we had climbed Porlock Hill we again found ourselves in somewhat overcast but still warm conditions. After a short break to admire the view we set off across Exmoor for Exford over deserted and rolling roads, dipping in and out of the mist as we drove. Stopping for further exercise and/or sustenance we then made our way to Wiveliscombe, where The White Hart proved to be welcoming, relaxing and well-suited to our needs in all respects, so an enjoyable time was had by all.

A prompt start the next morning saw us arrive at the West Somerset Railway's Bishops Lydeard station for the first train of the day, which happened to be drawn by visiting locomotive , a replica A1 class machine which took some 19 years to recreate after the original members of this class were all scrapped in the 1960s. The huge engine and its long string of carriages made an impressive sight on what would turn out to be an incredibly warm day and we were soon bound on the hour-and-a-quarter trip to Minehead.

Once there, groups and individuals took in different aspects of the resort before returning by steam or diesel trains to our starting point, again enjoying the many interesting aspects of the railway and its landscape before dispersing after another successful weekend.